This year’s Congress of Neighborhoods for the Neighborhood Councils (NCs) was up in attendance by the hundreds and consistent in quality as previous years. The program was well planned out and consisted of workshops from gaining knowledge of City departments’ protocols to improving pertinent management skills required of NC board members for successful interactions in increasing City engagement. There were 39 workshops coordinated with presenters, some with moderators and panelists that included City officials.

The LAPD Cadets served as hospitality hosts, adding charm and formality to the NC Congress. Their elegance was all around the rotunda of the 3rd floor at City Hall, providing directions to arriving visitors. “In that direction,” said one as she pointed with her white gloves.

In the opening session, City Council President Herb Wesson, Chair of the L.A. City Neighborhood Councils Committee, opened with brief inspirational stories about leadership, saying that leadership is a tough job: “It’s about taking people where they don’t want to go, and that is progress.” Wesson said to the NCs, “You are elected leaders of the greatest City on the planet whether having gotten 3 votes, 300, or 3,000.” In addition, District 10 Councilman Wesson made two announcements: his added position as Councilman for City District 7 and his appointment of Tony Wilkinson to work with him in District 7, both will fill the vacancy in the interim until the upcoming elections. Mr. Wilkinson is a Board member of both the Panorama City NC and the North Hills East NC. He’s had a steady and successful track record of active participation in the NC system since its inception. In a brief interview Mr. Wilkinson said, “I’m a Liaison for Herb to listen to the community, bring issues to him, and work with the field deputies to provide input to Councilman Wesson. This is a part time, temporary gig on the city payroll.”

To close the opening session, members of the Pacific Opera Project sung, “I love L.A.” as the packed city chambers cheered. Founder of Make Music LA, Dorsay Dujon was part of the planning committee for this Congress and said that permission was gotten to use Randy Newman’s song at this Congress.

MORNING INTERVIEWS
Tony Wilkinson expressed that every time we have a Congress, he is so happy, “When the City decided to stop funding it, we demanded, Cindy Cleghorn demanded at the Los Angeles Neighborhood Council Coalition (LANCC) that we do it ourselves. And, so every time we do it ourselves successfully, I think the NC Congress is a wonderful thing.”

Marketing volunteer for this Congress, Ann Marie Holman is very proud to have contributed to the increased number of attendees, from the last two years’ average of 635 to this year’s register being over 800 and at least 100 more attendees walked-in this morning.  Ms. Holman was in charge of most of the outreach for this year’s NC Congress. “I did the marketing: Designed the website, flyers, bookmarks, and some of the programs,” she said.  Holman is a former Echo Park NC board member and Planning and Land Use Committee chair. “If somebody has no idea on how to do their job as an NC member and comes to this Congress, the systems biggest event of the year, member will leave equipped to hit the ground running,” she said.

Danielle Sandoval Treasurer for Central San Pedro NC and Budget Advocate for Harbor Area Region-12 will be teaching two workshops, New Faces of Neighborhood Councils and How to Spend NC Funds. Ms. Sandoval stated, “I’m very excited because throughout L.A., NCs get x-amount of dollars and this workshop will teach board members how to spend their money and not let it revert to the general fund.” 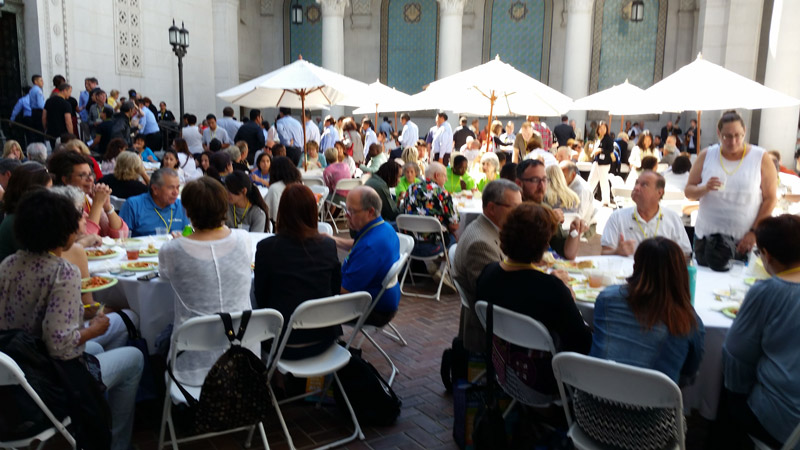 AFTERNOON INTERVIEWS
“This is the most significant event of the year with a lot of training opportunities,” said Robert Guevara stakeholder and former board member of Eagle Rock NC. Mr. Guevara said that everyone could benefit whether they believe it or not.  “It seems that we’re getting a lot of new board members with no experience whatsoever; this is a good opportunity for them to learn in a short amount of time protocols and later brush up on their own.”

Similarly, Lydia Grant former Board of Neighborhood Commissioners, originally from Sunland-Tujunga NC thought the Congress was amazing. “It’s always amazing. It’s wonderful to see such a big turnout of people interested in learning to do a better job in their communities and that’s so critical.”

This is the first NC Congress attended by Darcy Harris Board Member and Vice Chair of Echo Park NC. “There’s so much cool information it’s almost impossible to choose what to go to. It’s been great so far, meeting people from other NCs and public officials,” Ms. Harris said. “Everyone is very enthusiastic and very open to sharing ideas and meeting new people. I’m enjoying it.”

Bob Gelfand, stakeholder of Coastal San Pedro NC and featured columnist for citywatchla.com, commended the useful things NCs do as volunteers, such as cleaning the beaches and now Emergency Preparedness. Mr. Gelfand added that this event is a chance for people to get together and hear talks from the experts, “Yet, the other fundamental purpose of NCs is missing here, our right and responsibility to evaluate City agencies and tell the government what’s wrong. This is completely lost in most of the presenters that turned out today,” he said.  “They’re not particularly interested in teaching us how to criticize them. In that sense this is not doing that particular job.” Mr. Gelfand suggested other places where that can be accomplished such as the regional alliances, LANCC, Valley Alliance, and in our individual NCs.

Comments on today’s lunch– Alexia Teran, from Greatest Cypress Park NC, shared that she was telling Department of Neighborhood Empowerment General Manager, Grayce Liu, “that next time they should provide more salads and fruit for lunch. Not everyone cares for what they served for lunch today.”  In addition, Ms. Teran added that in prior years, postings of the program were up in different places for quick viewings “but not this year.”  Lastly, she voiced that there were twice as many people at this Congress as last year.

Andy Griggs, involved stakeholder in the Echo Park NC, stated that there was nothing mentioned on ADA Access in the congress webpage or online registration. Mr. Griggs expanded, “There was no information on possible translation, hard of hearing, or special parking needs. There were no numbers to call, asking for a disability sticker. I sent an email to the organizers of the event and I got no reply.” On the other hand, Mr. Griggs found the experience and workshops’ information to be wonderful as well as the access to the politicians. He said that the opportunities to network with other NCs is great, and to find that they too, have similar problems as the Echo Park NC.  He closed, “I only saw one service animal here. If we’re not welcoming… to be inclusive, that’s something that needs to be worked on.”

After the 3rd Session, Heinrich Keifer former President of Historic Highland Park NC and Congress Day Volunteer Coordinator explained what he witnessed as he stood in the City Hall Rotunda not far from the elevators. Keifer saw two fire department trucks pull up on Spring Street. “I heard there was a jammed elevator with about 12 or more cadets. A full ladder was brought in and 6 to 8 firemen came into the building with crowbar type tools to dislodge the doorway. They needed to free the cadets who were apparently stuck in an elevator,” he said. “They were probably going up to the 24th floor to see the highlight of City Hall.”

This is the sixth year that Marlene Savage has participated in planning and coordinating the Congress. “I coordinated the exhibitor tables and two workshops with excellent turnouts and very good evaluations,” said Ms. Savage. And added that Planning, and Building and Safety had 70 attendees, and Clean Streets and Sanitation had 40. “My feeling is that this is the best Congress we’ve ever had. We had great workshops this year,” she expressed.

John T. Gonzalez Board member and Parliamentarian of Harbor City NC said that he attends many of the city functions. Yet, “this was by far, the most enthusiastic session that I’ve been to in a long time. Everyone seemed to have a really good time. The speakers were outstanding. The audience was amazing, and no one acted ridiculously and that’s what made it even better!”

Lastly, the Congress altar, ‘Celebration of Life’ in the south hall of the City Hall Rotunda–3rd floor was created in memory of nine former NC board members who passed last year. Dorsey Dujon said that they were very active in their communities. “The work that they did is beyond and above the ordinary.” She said that this building [City Hall] is the seed of our government and “coming to it energizes us and lets us know that the work that we’re doing is appreciated.” 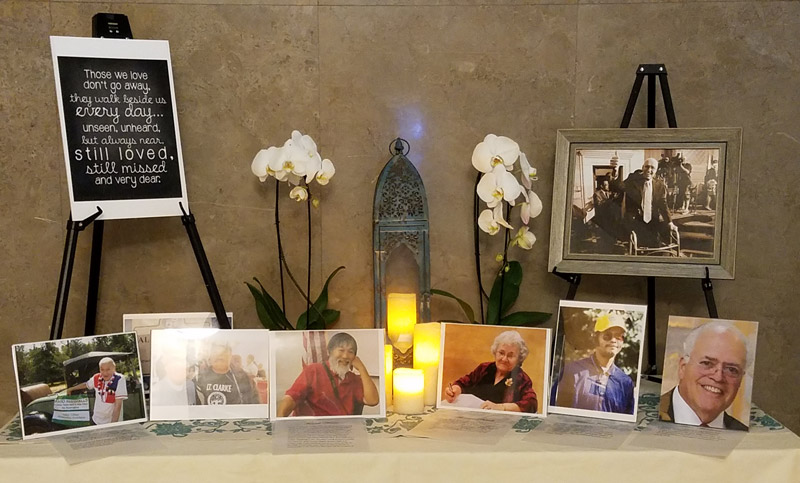