Paper or Plastic (or Reusable)? Weigh in on the L.A. Bag Debate 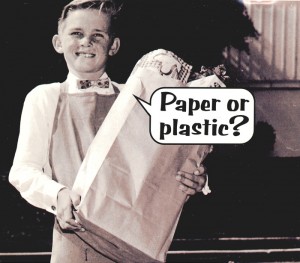 The City of Los Angeles is proposing to adopt and implement an ordinance to ban the use of single-use plastic carryout bags, charge a fee on paper bags, and promote the use of reusable bags at specified retailers within the City. A six-month grace period would be provided for large retailers and a one-year grace period would be provided for small retailers, which would include a public education component.

The City of Los Angeles has completed an Initial Study which indicates that the proposed project may result in significant impacts and therefore an Environmental Impact Report will be prepared.

The Notice of Preparation and Initial Study are available for public review from September 20, 2012 to October 19, 2012. If you would like to comment, please send your written comments so that they are received no later than October 19, 2012 to:

The City of Los Angeles, Bureau of Sanitation will hold meetings to receive public input on the proposed project and the Initial Study, as follows:

The Initial Study is available for review at the City of Los Angeles Bureau of Sanitation at 1149 S. Broadway, 5th Floor, Los Angeles, CA 90015, www.lacitysan.org under What’s New…, and at the following public libraries:

Thank you for your participation.