Today, my fellow Commissioners and I completed the process of reviewing Chief Charlie Beck’s request for a second five-year term, and we granted him that request in a 4 yes and 1 no vote.

We received a great deal of help in our decision making process, and that help came from the people of Los Angeles. I want to thank each and every person who sent an email, wrote a letter, or came out to a community meeting to let us know exactly what they want, need and deserve in their Chief of Police. These comments made an impact on each of us and we are very appreciative for the assistance.

This process lasted approximately three months and included numerous interviews with Chief Beck. During those interviews, my fellow Commissioners and I drilled down on every issue facing the Los Angeles Police Department. No subject was off-limits, and I can tell you, at times, the questioning was intense. In the end, we knew we had to be thoroughly confident that Chief Beck is not a good leader for the Los Angeles Police Department, but a great leader.

How did we judge Chief Beck? We looked at everything at LAPD. Chief Beck is the chief executive officer at LAPD, and at the end of the day, he is responsible for this large law enforcement agency. We looked at his ability to keep this City safe and reduce crime, his ability lead approximately 12,600 sworn and civilian employees effectively, and his ability to plan for the future.

Chief Beck demonstrated to the majority of the Commission and proved during the last five years that he is a leader who understands law enforcement and the unique needs of every part of this City. Yes, law enforcement is law enforcement, but Mar Vista is not El Sereno, and Athens Park is not Canoga Park. Chief Beck understands that better than anyone…and he knows what works in each unique community. He is the right person for this job, even though he recognizes that improvements must be made.

The fact that my fellow Commissioners did not provide a unanimous vote on this decision is proof that this Commission is comprised of independent thinkers. Nothing more and nothing less. We consider ourselves very fortunate to be part of a group which not only respects, but values different opinions.

It is now time to move forward and allow Chief Beck to demonstrate his leadership of the LAPD. My fellow Commissioners and I are all committed to doing what is necessary to assist and support Chief Beck in his efforts to lead the LAPD for the remainder of his first term and look forward to him having a successful and productive second term.

Chief Beck will fulfill his first term, which ends on November 17, 2014. He will then be sworn-in for his second five-year term.

A copy of Commissioner Soboroff’s public comments from today’s hearing is below. 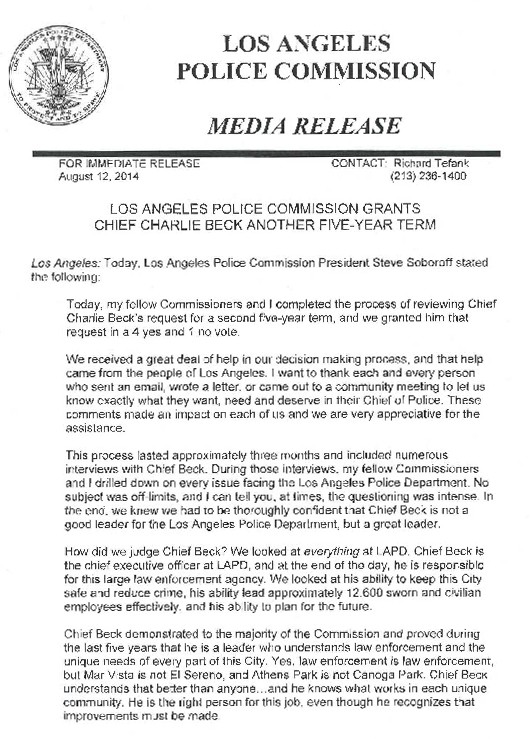