The city began providing body cameras to officers this week in the LAPD’s Mission station. A total of 860 cameras will be distributed to officers in three stations over the next month. 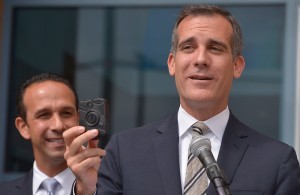 On Thursday, however, the American Civil Liberties Union of Southern California sent a letter to the U.S. Department of Justice, asking the federal agency to deny the city’s request for funding for more cameras, claiming the policy restricting the release of footage hinders the mission of creating transparency.

“By withholding video from the public, requiring officers to review video before making statements in use-of-force and misconduct investigations and failing to include protections against the use of body-worn cameras as general surveillance tools, LAPD’s policy provides no transparency and threatens to taint the integrity of investigations and undermine the public trust,” ACLU staff attorney Peter Bibring wrote.

Garcetti said he respects the ACLU’s position, but he does not support the blanket release of video from the cameras. He said one of the cameras caught footage this week of a domestic-violence case that included an altercation involving the suspect and victim.

“That is not something that should be shared publicly,” Garcetti said. “We should not have a policy that says automatically that goes out to the public.”

The mayor said he also does not want the public release of footage to taint a criminal investigation, possibly endangering the chances of a conviction in court.

“When we have a bad apple in this department who does something that goes over the line that violates people’s rights and breaks the law, I don’t want anything to taint that (evidence) that should result in a conviction,” he said. “Vice versa, if we have somebody who is doing something criminal against one of our police officers or to another innocent person in this city, I want to make sure that an early release of video doesn’t taint their conviction. This is about ultimate accountability, which is our criminal justice system.”

Beck stressed that the body camera footage will be made fully available to the Office of the Inspector General, which reviews officers’ actions in use- of-force cases, and the city Police Commission, which oversees the LAPD. It will also be provided to the District Attorney’s and City Attorney’s offices on request, he said.

“I know that this is of great interest, especially to people that make their living selling video — this is very, very interesting stuff,” Beck said. “… But remember, we interact with people on their worst day. We interact with people in situations that none of you, if they were your family member, would want made generally public. We have a position of trust with people that call us to respond to their houses to deal with situations that nobody else will deal with, and we want to maintain that level of trust.”

Beck said he does not want a victim of crime to avoid calling police out of fear that video footage of them will be posted online.

Garcetti noted that the Police Commission plans to review the body camera policy in six months.