This a decisive moment. For the first time in my memory, both the Mayor and the President of the City Council have reached out to include ALL Neighborhood Councils in a critical city decision.

In November, the City of Los Angeles will ask voters to approve significant changes in how the Los Angeles Department of Water and Power is governed. The decisions on what will be included in this ballot proposal will be made in May, so that the City Council can act on a ballot measure in June.

In order for our community input to be considered, we need to act in April and communicate our opinions by early May.

The “DWP Reform” package will include a package of proposals. Several of us will do our best to outline the issues in a simple way. What is important to understand is that your Neighborhood Council does NOT need to struggle with the whole package in order to have an impact on the ballot measure.

HERE IS ONE SUGGESTION FOR SUCCESSFUL ACTION:

(1) Engage your community through a committee meeting or a town hall. Promote it!
(2) Encourage Board and community members to write individual letters (emails OK).
(3) Put an agenda item on your April Board meeting to consider taking a position on one or more of the DWP Reform proposals.

The City of Los Angeles is considering a ballot measure to change how the Department of Water and Power is governed (Council File 16-0093). These proposals include changes to the Board, increasing the Board’s independence, creating a paid staff for the Board, giving DWP more hiring freedom including possible removal from civil service, and authorizing the transfer of funds from the power system to the city at a fixed level. Consider taking a position on one or more parts of this proposal, and authorizing a Community Impact Statement.

(4) Now is the time to DO IT: file a Community Impact Statement on CF 16-0093. If you have not been using the CIS system, add an agenda item in April to authorize it.

In addition, Mayor Garcetti has issued a very helpful statement of principles that he would like to see in the DWP Reform discussion: http://tinyurl.com/MayorDWPReform

Council President Wesson has held two special meetings of the Rules, Elections, Intergovernmental Relations and Neighborhoods Committee for the express purpose of considering DWP Reform (February 19 and March 3). He will hold a third special meeting on Friday, April 8, at 8:00 am at City Hall. There are several “report-backs” on DWP Reform that are due by this meeting. Although it will be at 8:00 am downtown, you may want to listen to the meeting on Council Audio (Council Calendar on lacity.org).

Following the Rules meeting on April 8, Neighborhood Council alliances will host three regional meetings where the public can come to discuss DWP Reform:

To help get the discussion started, the Pat Brown Institute at California State University Los Angeles will host a forum on Tuesday, March 29, at 6:30 pm at the Ron Deaton Auditorium in the LAPD Administration building south of City Hall. Mayor Garcetti will deliver opening remarks. See the attached flyer for distribution.

The forum will be moderated by Rd. Raphael J Sonenshein. Panelists will be Marcie Edwards, LADWP General Manager, George Kieffer, Chair of the Civic Alliance and the Charter Reform Commission, and Tony Wilkinson, Chair of the Neighborhood Council-DWP MOU Oversight Committee. 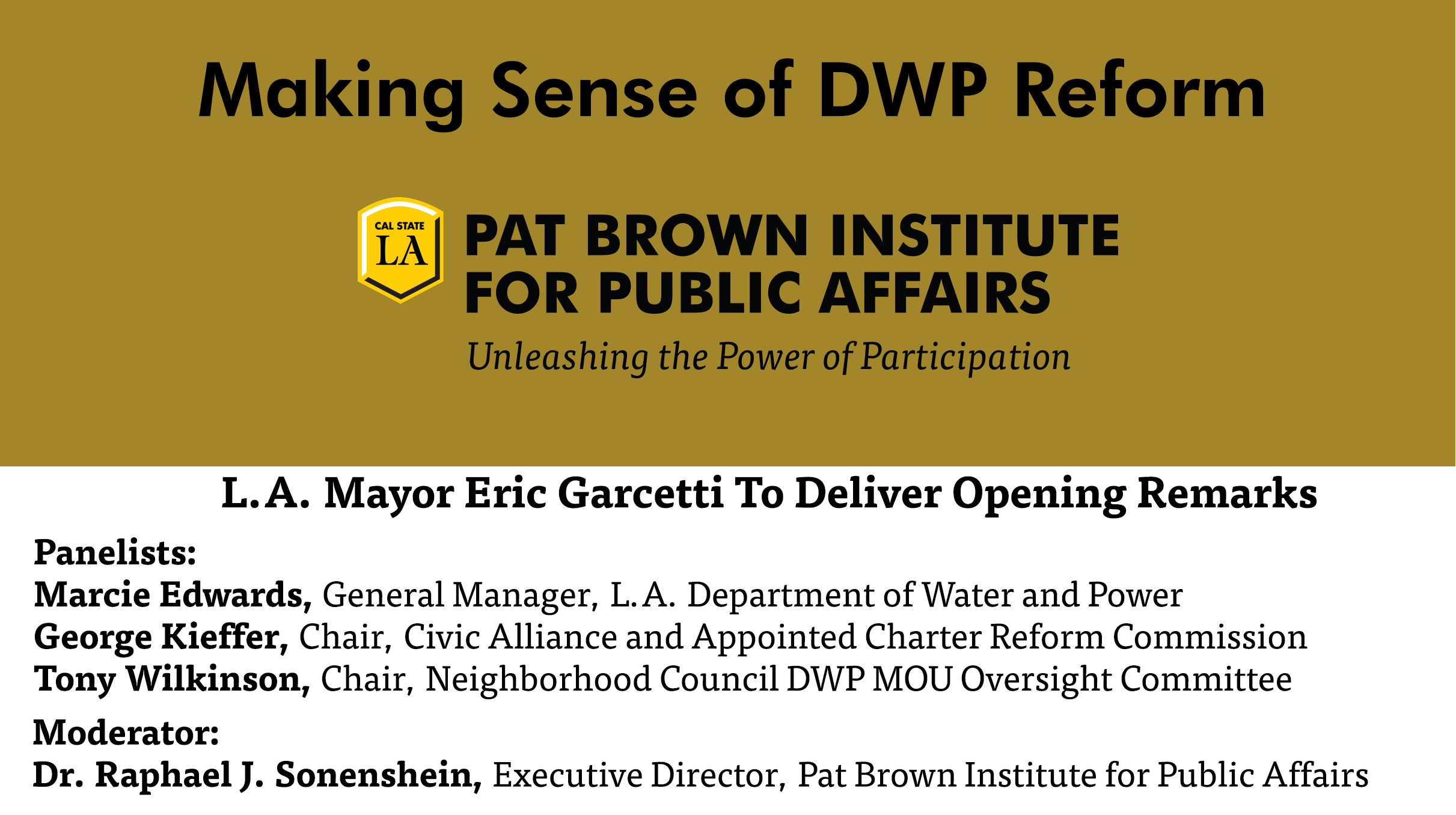