City Council President Herb Wesson announced today he will serve as caretaker of a San Fernando Valley district that was left unrepresented by the departure of Councilman Felipe Fuentes.

A city staffer is typically appointed to oversee a district when a council member leaves, but Wesson said he will step in himself to manage the affairs of the Seventh District, which includes the communities of Sylmar, Pacoima, North Hills, La Tuna Canyon and Lake View Terrace.

“I love the Valley too much to let its residents go without representation until next year,” Wesson said. “Residents have my word that I will do whatever is necessary to ensure their district is protected and their interests are championed.” 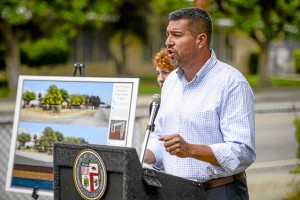 Wesson said he planned to submit a resolution to the City Council requesting that the winner of the March 2017 election or a potential run-off in May be allowed to take office to replace Fuentes at the first City Council meeting after his or her election.

Wesson told City News Service that during the six to eight months before a new council member could be appointed, he might be able to do more for the district than a staffer, such as watch out for attempts by other city departments to “sweep money from the district.”

“I have the highest respect for bureaucrats, but I can bring a different level of inspiration to staff, and I can make things happen quicker for Council District Seven,” Wesson said, adding that his involvement would “make the best out of an unfortunate situation.”

“If you don’t have a member, who better than the president to be watching your back and your resources in the district?,” he said.

Wesson said that when he was appointed caretaker of the 10th District in 2005 — after he had already won a special election to fill the unexpired term of the previous council member — he learned of an attempt by the housing department to move about $1 million from the district’s coffers and was able to put a stop to it.

Wesson said he plans to meet tomorrow with Seventh District staff, and that for day-to-day matters, he has assigned one of his own council aides, Vanessa Rodriguez, as the “point person” to work directly with the district office.

Fuentes stepped down from the council on Sunday, about nine months ahead of schedule, to work as a lobbyist in Sacramento. He did not attend his final City Council meeting on the Friday before he officially stepped down.

Fuentes’ unexpected announcement earlier this year that he would not seek a second term has attracted two dozen potential candidates who are expected to vie for his seat in March.