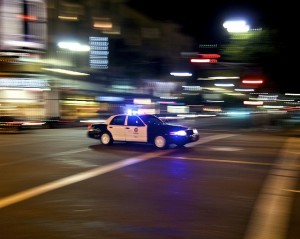 The Los Angeles Police Department joined City Councilmember Richard Alarcon, 7th District, at a news conference this morning, to announce funding for a dedicated police party patrol car, which will resume operation next weekend and every weekend until the end of the year.

“I want to thank Councilman Alarcon personally and on behalf of the public in the Northeast Valley for fighting for these funds,” said Captain Todd Chamberlain, commanding officer of the Mission Community Police Station. “This patrol car will bring a little more solace to the neighborhoods and no doubt reduces some major crimes.”

“The Party Car might sound like a bit of a misnomer,” said Captain Todd Chamberlain. “It’s no party for the officers assigned as they patrol through neighborhoods where loud, raucous parties often hold neighborhoods hostage.”

The Party Car was instituted earlier this year as a way to free up regular patrol cars for other, more pressing cases. “We’re not talking about kids’ birthday parties or baptisms,” Captain Chamberlain explained. “These are adult parties with heavy drinking, loud music, and often sponsored and attended by gang members.”

Nearly 5,000 party disturbance calls after 10 PM were logged with 9-1-1 last year for the Northeast Valley. This year through August when the Party Car was last run, officers had responded to nearly 2,100 parties. Among those, one rape, two robberies and over a dozen aggravated assaults had occurred.

On October 14, 2012, three men were stabbed, one nearly to death, in two incidents at a party on Dronfield Avenue in Sylmar. Early intervention from officers assigned to the party car can prevent these all-too-common assaults.