Baker 2 Vegas Volunteer to be Honored with Special Van 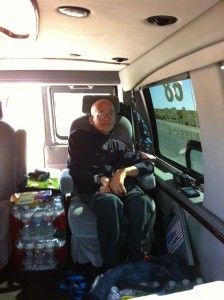 He’s logged more miles over the 30-year history of the Baker 2 Vegas Challenge Cup Relay than any other volunteer, but he’s never run a single step; that’s because George Brown has been confined to a wheelchair his whole life, but that’s never stopped the 58-year-old from doing what he wants and following his passion.

“This man has a passion for life and a passion for helping others,” explain Pastor Martin Morehouse, who is an LAPD reserve chaplain and George’s brother in-law.  “George inspires all of us to want to do more.”

To mark his 30th anniversary as a volunteer team driver for the Challenge Cup Relay, the officers of LAPD’s Mission Police Station and George’s family, who are also volunteers, have customized George’s specially equipped van with a special wrap to commemorate George’s tenure with the race and his decades-long commitment to supporting LAPD.

“George’s van will serve as our follow vehicle, as it has for many years,” said Det. Juan Santa, who is the co-captain of the Mission Station’s Challenge Cup Relay team.  “It’s a fitting tribute to a man who has given so much of his time for us.  We wanted him to know how much we appreciate him, and how much he serves to inspire us.”

While George’s physical condition is such he can no longer drive his van, he will be in the van the entire race as the honorary driver while his sister and Pastor Morehouse take turns as drivers, March 28 – 29, starting Baker, CA.

The surprise unveiling of the wrapped van will occur Tuesday, March 24, 2015, at the Mission Police Station at 4 PM, during the last team meeting before the March  28 race.  Local media are welcome to cover the event and help to recognize George Brown.  His family will be present, along with the station’s running team and support volunteers.